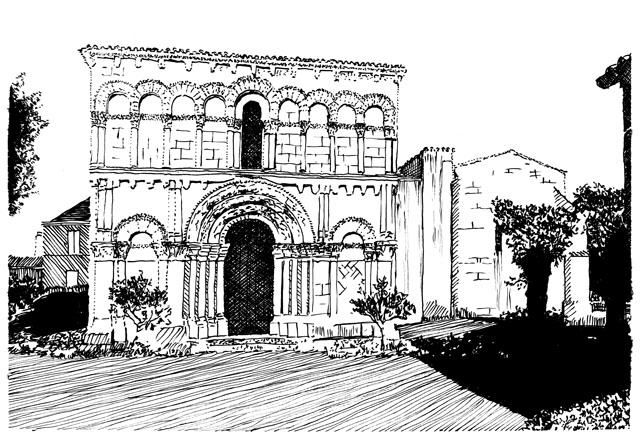 The Church of Échillais, this edition’s print of a sketch by Ladd P. Ehlinger, AIA, is dedicated to Our Lady of the Assumption. It has a long and varied history, and is one of the most exquisite Romanesque churches in France. The Romanesque style is characterized by bold, semi-circular arches composed of very wide voussoirs (wedge-shaped or tapered stones used to construct an arch). The Romanesque style spanned from the 9th Century to the 12th Century, when it was replaced by the Gothic style.

The west front facade and the barrel vault nave with the apsidal choir of the church of Our Lady was erected in the beginning of the 12th Century, probably by Thibaut Gomar (Goumard) d’ Échillais, Lord, on the footprint foundation of an older building. At the time of the restoration work of 1970-71, a base in a semi-circular pattern of an apse foundation was discovered. This foundation probably dates from the 9th Century. Close to these vestiges under big stones, skeletons were discovered and exhumed. In the nave, the four bays that precede the choir seem to indicate what was intended to be the support of a dome that was not built.

In the 12th Century, an addition was built at the south. the chapel of St. Sebastian or chapel of the Catechisms, also a barrel vault. Its construction is of Gothic style. This chapel had some ogives (pointed arches) in the crossing connection. In the first half of the 15th Century was built the second chapel of groin pointed vaults, dedicated to St. Julien, where the Lord d’ Échillais, the Goumard, is buried.

The west facade shown in the print is the jewel of this assemblage. The facade is a square, divided almost in half vertically with strong ledges moldings. The proportions are aesthetically very satisfying with golden rectangles dominant. The main entrance is a telescoping assembly of Romanesque arches suggesting a triumphal arch. It is flanked by two arches and strong engaged columns. The second level is an arcade of Romanesque arches about a slightly larger center arch piercing the wall as a window. The sculpture decorating all arches was beautifully done, depicting saints and elements from nature. Unfortunately, acidic rain from industrialization effects on the climate, has caused severe erosion and damage to most all of the stones of the west facade, but especially to the sculptures.

To the rear is a bell tower which is not remarkable architecturally, and the foundation remains of an earlier sacristy. 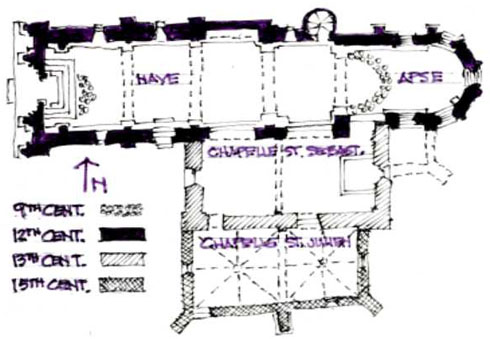