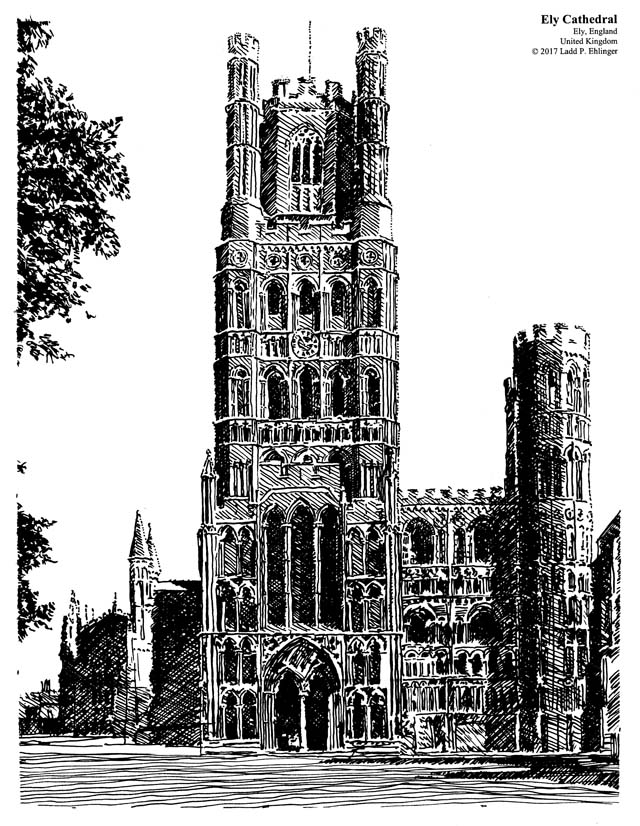 Ely Cathedral has a long and rich history, beginning in the 7th Century when it was initially founded as a double monastery for both monks and nuns, by St. Etheldreda, a Saxony princess. She married Prince Egfrid of Northumbria, and when he assumed the throne as king, she became queen. Apparently, she was extremely chaste and pious and never consummated the marriage (or admitted to having done so), and King Egfrid released her from her marriage vows in 672 to become a nun at a monastery in Berwick run by Egfrid’s aunt. She later died of a throat tumor brought on by the bubonic plague in 679. Her body was exhumed and moved in 695 to the church, and when it was examined her body was found to be in remarkable condition and that the tumor had been healed or erased after death, or so the story goes. Later, her body was moved again into the Norman church built at the Ely site in 1106, and again into the Presbytery in 1253 built to honor her.

Ely has been sacked and pillaged by invaders from the Danes to the Normans, and ultimately it changed from a monastery to a cathedral in 1108. The architectural construction is as varied as the history, with the Norman rounded thick arches still retained on the lower levels and in some of the transept wings, to the pointed English arches, and ultimately to the fan vaults and the high Gothic vaults of the secondary chapels. In 1322, the central tower of Norman construction collapsed destroying the three bays that remained at that time of the Norman choir along with parts of the nave and transepts on either side. This disaster was solved brilliantly by removing one bay east, one bay west, one bay north, and one bay south of the crossing, thereby creating an octagon in plan that is quite spacious and supports fan vaults, that in turn support an octagonal lantern which brings a marvelous light to the very center of the cathedral. The octagon theme then became the dominant motif of this church.

A similar disaster on the west front was not dealt with as skillfully. This church has a central octagonal tower, with a “porch” each side terminated originally on the north and south by smaller octagonal towers. Sometime in the late middle ages (the exact date curiously unrecorded as is the cause), the north porch and its tower collapsed. It was replaced with a rather crude triangular buttress at the line of the nave’s beginning, which can be seen to the left of the tower in the sketch by Ladd P. Ehlinger in this issue’s print of it. The net result is an asymmetrical west front, which is unique among all English Gothic cathedrals, and adds to the charm and delight of the building.

The Lady Chapel on the northeast was a late addition, and is of high English Gothic style. It has beautiful fan vaults in a simple plan with very large windows that flood the space with light. This addition rivals the King’s College Chapel at Cambridge which is nearby.