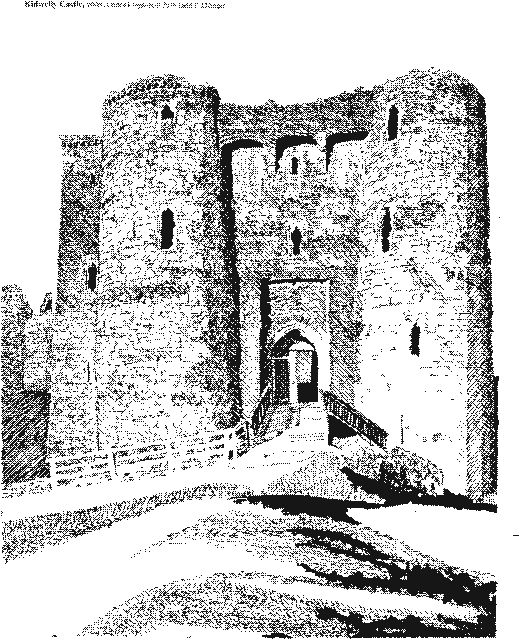 Kidwelly Castle is a Norman castle on very high ground at the mouth of the River Gwendraeth at the last bridge point in the town of Kidwelly, Carmarthenshire, Wales. Kidwelly Castle is the English language translation of the Welsh Casteli Cydweli. This castle was a Norman fortification built and rebuilt over many centuries from the initial invasion of England by William the Conqueror in 1066. The first castle was of wood construction and was sited where it is as a defense against the native Welsh. It was a site that could be serviced by both land and sea.

The first stone construction of the castle was built ca. 1106 by Roger, the Bishop of Salisbury, who had been granted the lordship of the entire south west Welsh coastal plain by King Henry I. Roger also established a Benedictine priory which attracted numerous people to develop the town of Kidwelly.

In 1136 there was a Welsh uprising led by the Prince of Deheubarth and his wife Gwenllian. The Prince went north looking for aid while his wife led the army that attacked the castle. Gwenllian was defeated and beheaded by English troops under the command of Maurice de Londres just north of the castle. The surrounding countryside is reputed to be haunted by the headless ghost of Gwenllian.

Over the years, numerous other uprisings took place, and the castle was finally taken in 1215. It was subsequently retaken by the English/Normans, and resisted further Welsh attacks over the years, all the while being strengthened and rebuilt. It passed into royal ownership in the late 13th century to Henry, Earl of Lancaster. Sometime in the 14th century, the grand gatehouse, the sketch by Ladd P. Ehlinger in this edition’s print, was added. In the 14th century, Kidwelly began to be used as an administrative center of the Lancaster family. Finally, in 1403, the town was sacked, but the castle held out against the Welsh when attacked by Henry Don. After this, there was no longer a military need for the castle. Repairs were kept up, but it fell into a gradual decay, and is now a very large magnificent ruin.

The plan of the castle consists of a square inner bailey, defined and defended by four round towers on the corners. The inner bailey is surrounded on the west, north and south by a semicircular outer curtain wall on the landward side with integral towers periodically, culminating in the massive gatehouse on the south end next to the river. The east side defense is the river itself, which also services the fort and is a means of escape.