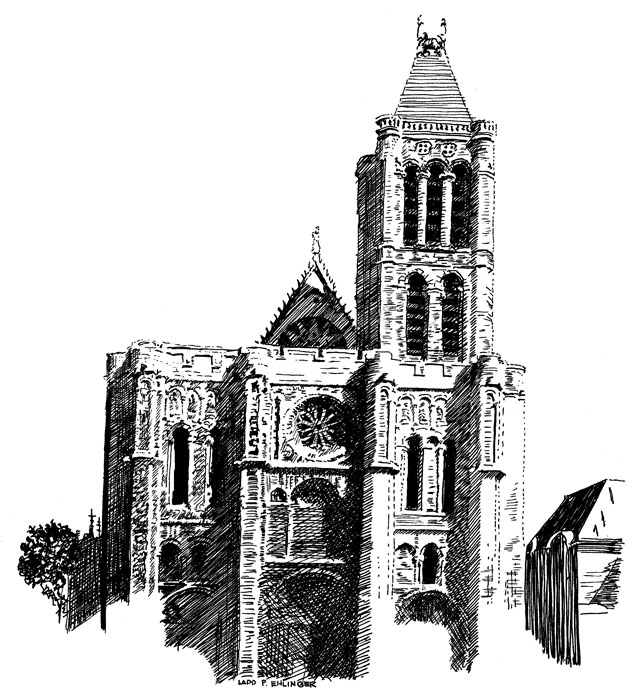 This issue’s signed limited edition print by Ladd Ehlinger is of the church of the Abbey of St. Denis, near Paris, France. St. Denis became the most important church in France because of and during the tenure of the Abbot Suger from 1122 to 1151. Suger was a friend of the royal house, and for a time was the national Chancellor. The royalty began to be buried at St. Denis through the Abbot’s inﬂuence, but the Abbot’s lasting historical fame comes most from his having devised a comprehensive constructional concept which interpreted the meaning of the Gothic cathedrals, and the expression of this meaning in three dimensional form.

Suger theorized the Gothic forms primarily as a means for the alteration of light, and expressed that through this modulated, over-powering light the faithful would experience the presence of God. The pointed arch represented man’s reaching toward heaven (while at the same time it is a more efficient arch in the sense that it has less thrust or horizontal force exerted upon its supports). The emphasis of verticality in the columns, trim, and other forms was another device to represent the heavenward reach. With the pointed arch, combined with buttresses, Suger devised the seeming physical and aesthetic experience of the dematerialization of the walls of the building, allowing the windows to become much larger, ad- mitting more light into the interior (a practical necessity in the northem latitudes). The glass in the windows was colored (stained) to introduce the proper spiritual and emotional mood, and executed in such a way that it inhibited one’s ability to relate to anything exterior of the building, thereby giving a sense of infinite space beyond. This infinite space represented the infinite nature of God.

The lofty height of the structure was also intended to represent the striving for God, and the intersecting pointed (groined) vaults he perfected do not interrupt the eye in its movement towards the representa- tion of the Creator at the altar. Consequently the forms and the spaces they define are of the processional mode, with an uninterrupted visual movement, which to him represented man’s transformation in the journey toward God in life.

The west facade in the print has the earliest use of the pointed arch on the south (right) half, and was the earliest portion of the church built by the Abbot after he assumed responsibility for the Abbey. He inherited a partially completed Romanesque building, which he rebuilt and transformed into a Gothic one. The chevet (rear wing) was the first portion of the building to be completed by Suger, and it was constructed in mature Gothic style from the beginning. Suger merely completed the west facade and altered it a little in the Gothic theory. He then tore down the nave (main body of the church) and completely rebuilt it in mature Gothic style as well.

The Abbot Suger succeeded in expressing in three dimensional reality the religious mysticism of man’s attainment of unity with God through transformation and procession in life. This theme of church architecture as an expression of the theology was with the church from the beginning, but it reached its zenith under Abbot Suger. There was a contrasting theory of man’s ability to reach unity with God through intimacy and there was an architectural expression of this as well, more about this in a later issue.

Gothic architecture has probably become the strongest style to express Christianity in the western world, so much so that it is almost an archetype. This is why we chose St. Denis for our fourth quarter issue, as it thus symbolizes Christmas.