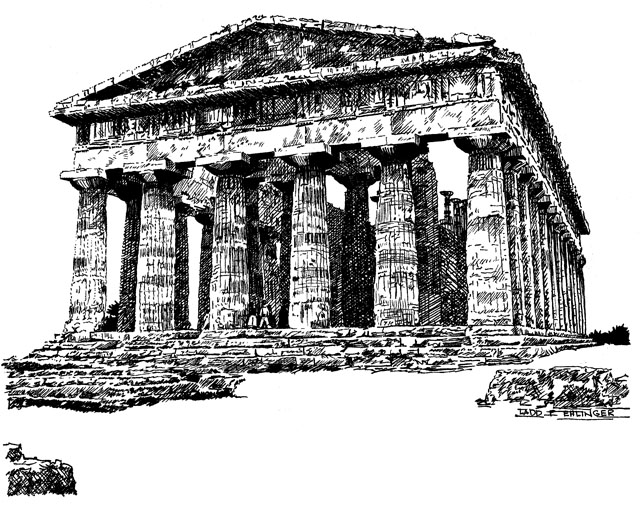 This issue's limited edition print is one of the Temple of Hera (c. 460 BC, also known as the Temple of Poseidon) in Paestum, Italy. Paestum was a western Doric Greek colony on the west coast of the Italian peninsula, just below present day Naples and the Amalfi coast. The architecture in Paestum is some of the earliest and best preserved Greek architecture dating from the 6th century BC, and exemplifies the early development of the Greek temple form.

The Paestum buildings are stouter and their Doric Order columns are closer together, shorter and fatter with a more pronounced entasis (curvature of the column from a fat base to a narrow top to correct for parallax distortion) and have bulbous, flaring column capitals.

The Temple of Hera is one of the best preserved of all early, archaic period Greek temples. It is more mature than the other buildings at Paestum, and transitional to the classic expression of the Doric Order of the columns, but still retains the raw brute appearance of the archaic archetype.