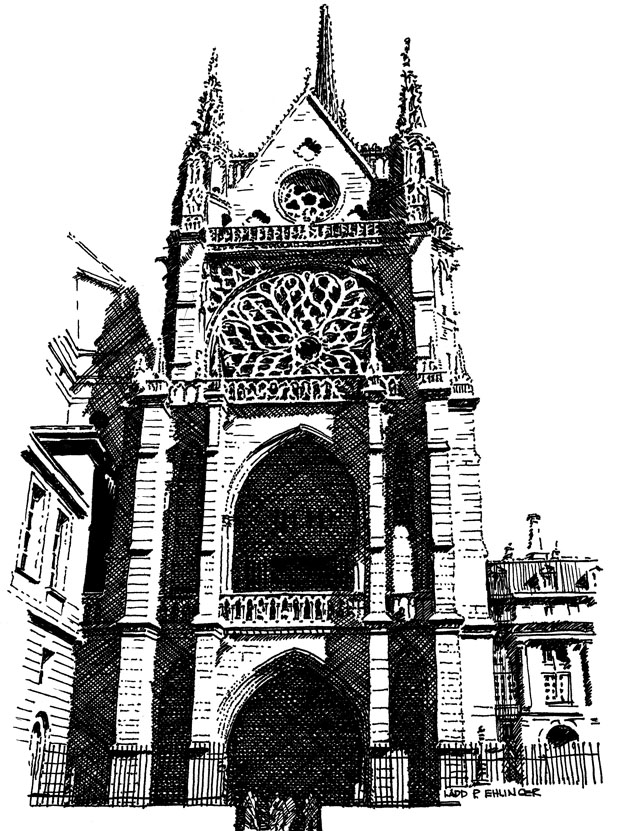 This issue’s limited edition print is of La Sainte Chapelle, Paris, France. La Sainte Chapelle was built by St. Louis, King of France, in the thirteenth century to house the Sacred Crown of Thorns obtained by St. Louis from Baudoin, Emperor of Constantinople. St. Louis had a hobby of acquiring sacred relics, and the cost of acquisition and their enshrinement exceeded the cost of the chapel by two and one half times. The other prupose of La Sainte Chapelle was to provide a place to worship for the Royal Family and Court, along with the servants of the Court within the Palais du Roi on the Ile de la Cite. In the sixteenth century, the king at that time moved the royal palace to the Louvre, and Palais du Roi became the Palais du Parliament, the seat of the highest royal court of justice. Since the revolution, it has retained that function as the Palaais de Justice.

Gothic architecture in France began c. 1150 and lasted to c. 1550. It is commonly divided by historians into three periods: (1.) “Primaire’ (twelfth century), sometimes called “a’ lancettes”, is distinguished by pointed arches and geometric traceried windows; (2.) “Secondaire” (thirteenth century) or “Rayonnet”, a period characterized by Rose Windows and circular insets within windows with wheel tracery; and (3.) “Tertiere” (fourteenth, fifteenth, and part of the sixteenth centuries) or “Flamboyant”, from the flame-like shapes of the window tracery.

Lasainte Chapelle was designed by Jean de Chelles and Pierre de Montreuil. It was started in 1243 and was built in record time, less than thirty-three months, but was only consecrated in 1248. This occurred at the time that Notre Dame, the cathedral of Paris, was under construction. This building is of the “rayonnet” period, with the exception of the west rose window shown in the print, which was rebuilt in the fifteenth century, and is thus “Flamboyant”.

This chapel is an architecturally seminal building in several ways. It was one of the earliest gothic buildings to display this pure of a clarity in execution of gothic concepts of space and form, where the walls have been eliminated entirely, being replaced by buttresses and stained glass to express by modulated light the infinity of space and thus God. It also served as the model for chapels, which came to be built more frequently as independent structures, and as infills in the chevets and side bays of the large cathedrals during this period.

La Sainte Chapelle is actually two chapels. The servents’ chapel is on the ground level and the court’s chapel is on the second level. While occupying and defining the same structure, these two spaces essentially do not communicate. While the architects did not use flying buttresses, they very cleverly used the added columns which define aisles of the structure of the first level to both reduce the span of the floor of the second level and provide some additional lateral bracing to the thrust © 1989 Ehlinger & Associates, P.C. Architects & Planners of the main vaults being borne by the buttresses. The lower chapel forms the base for the upper chapel. This can be seen in the transverse section, and the 1/2 floor plans on the reverse of the newsletter.

The lower vaults span 23’ and rise 23’ with side aisles of 6’ each, while the upper vaults span 35’ with a height of approximately 65’. The proportions of the plan and elevations are very sensitive with great feeling. The front porch projects forward of the basic four bay plan with apse. The buttresses rise with finesse and delicacy providing the only support of the main vaults, while the facades are simple and bold. The 50’ high by 15’ wide stained glass windows enhance the lightness of the structure, almost to an appearance of fragility.

The reliquery for which the chapel was built used to stand in the middle of the apse on a platform beneath the vault Two winding staircases lead to it The one on the left is original and was used by St Louis himself to open the precious shrine.

The interior has been restored to the original appearance where the walls were painted with various colors, usually dark Patterns were also painted to enhance the architectural motifs Stars were used in the field of some walls to further the concept of the dematerialization of the wall.

La Sainte Chapelle used to stand alone in the middle of the court, linked to the palace by a small gallery joining the upper doorway to St. Louis’ apartments. After the revolution, an unfortunate addition was made to the palace in the 18th century when a wing of the Cour de Mai was linked to Sainte-Chapelle. The reliquery was melted down and its contents were only partly saved (they are now in Notre Dame). The chapel was restored from 1841 to 1867.