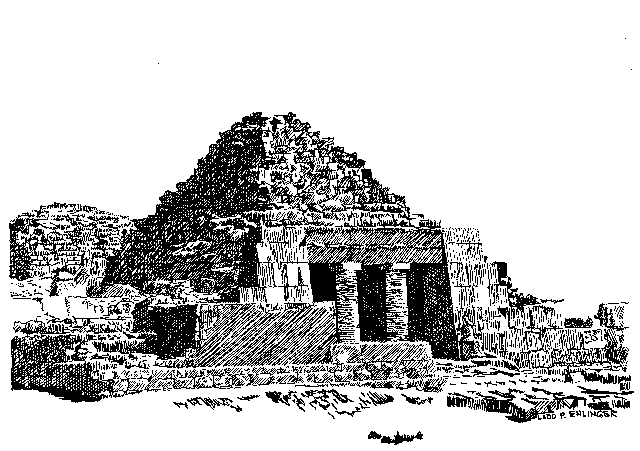 This issue’s limited edition signed print by Ladd Ehlinger is of the entry to the offering chapel of Tomb of Seshemnefer, a Queen’s Mastaba tomb. This tomb is part of a complex of multiple small tombs for queens and lesser functionaries, on the riverside of the Great Pyramid of Cheops in Gizeh, Egypt.

The entire complex is located on the southeast corner of the Pyramid (largest of the three Great Pyramids). The complex includes in addition to the mastaba tombs, a mortuary temple, an offering chapel, and five boat shaped pits, three on the south and two on the north.

There were three types of tombs in ancient Egypt: Mastabas, Royal Pryamids, and Rock'Hewn Tombs. This tomb is a Mastaba, a type of tomb typical of the Fourth Dynasty of Egypt (between 3200-2130 B.C.), and characterized by the low height and sloped sides of the structure. Most had flat tops. The majority of the tombs of this period were of limestone.