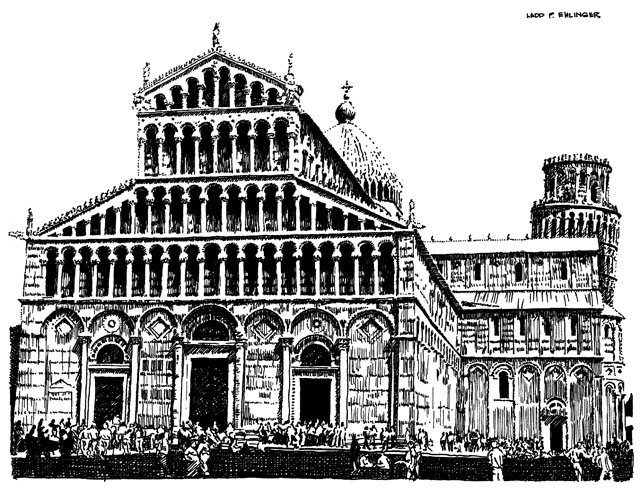 The complex of buildings at Pisa, consisting of the Cathedral, Campanile (bell tower, eg.: “the leaning tower of..”), Baptistery, and Campo Santo (literally: “field of saints”, or the graveyard) is one of the most famous in the world. Unfortunately, the fame to the lay person derives solely form the leaning tower, and not from the fact that this is one of the most visually and spatially powerful, coherent and consistent architectural complexes ever designed and built.

This sketch features the Cathedral and the Campanile to the rear. The Baptistery is in the foreground and the Campo Santo is to the left, both out of the view from the southwest. The Cathedral (1063-1118 & 1261-72) is one of the finest of the Romanesque period. It is of a Basilican plan, being cross shaped, with an eliptical dome at the crossing of the nave and transepts. The nave is composed of long rows of columns, connected by arches, double aisles, and roofed by a timber roof. The transepts each have an apse (circular shaped space) at their ends, which was an advance in design at the time, as does the sanctuary.

The facades of the building provided the interest to the viewer by their general proportions, the delicateness of the ornamentation, the relief of the open arcade tiers at the upper stories of the front facade in contrast to the engaged arcade at the bottom and on the other facades, and the clarity of the colors of the white and red marble in stark contrast to the treeless and shrubless green grass of the field upon which the whole complex is grounded. These designs features were maintained in the succeeding buildings that followed the Cathedral, and thus lend an extraordinary consistency to the whole, while reinforcing the design of the Cathedral.

The Campanile (1174-1271) is circular in plan and is eight stories tall. Like the front facade of the Cathedral, each story is an open encircling arcade, tiered one above the other to the belfry, which was added in 1350.

The Camanile is 52’ in diameter, is a little over 131’ high to the floor of the belfry, and leans approximately 14’. The inclination of the tower began during construction, causing the builders to attempt to compensate for it by shortening the height of the arcades on the high side (away form the direction it was starting to lean), which gives a banana like curve to the cylindrical form. Each year, the tower continues to lean more and more, causing much consternation and gambling about when it will finally fall over, and prompting various engineering studies and schemes of how to prevent the inevitable collapse.

The Baptistery is also circular in plan and is surmounted by a conical dome. Originally, it was Romanesque in style, with circular arches above columns encircling the building, but was remodeled in the 14th century when Gothic arches were added to the facade and the semicircular dome was added to the conical dome, disguising the shape. However the colors and delicacy were maintained throughout the remodeling.

At the time this complex was built, Pisa was a great commercial and naval power, rivaling Venice and Genoa. Pisa took the lead in the crusades, fighting and defeating the Moslems in several wars in the 11th century. The decline of Pisa began at the end of the 13th century, but they have maintained this complex throughout the centuries since, thereby making it one of the purest architectural wonders able to be seen to this day.